This is a field note that I wrote back in 2000, for the Montana Natural History Museum. I decided to publish it here since I get so many amazing photos of trees growing in rocks, and remain fascinated and inspired by the process. Hope you are as well! 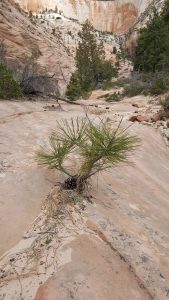 I spent a recent afternoon sitting on a large sunny rock, idly picking at the debris under my feet, when I noticed 3 spindly juniper trees growing out of a crack in the rock above me. It made the gardener in me wonder how they could survive, seemingly on thin air and a little rain water.

A few days later I stopped to look at a large ponderosa pine in the sapphire mountains. It had been growing on a cliff but had blown over last winter, exposing the underside of its roots. A mammoth root, wider than my head, had once rested on the surface of the rock, very little of it actually entering the rock. The underside of the root matched the rock precisely, its v-shaped profile fitting snugly into the crack. Only small hair roots, growing from the apex of the V over the entire length of the root, had worked their way into the rock itself.

How could those tiny roots nurture that entire tree?

Normally, roots grow downwards in response to growth hormones. But under stress, roots will grow toward any nutrients source. In cliffs, roots may follow a lateral crack back into the rock until they find a vertical fissure. They fan out in a plane within that fissure until they encounter another crack going deeper. Filling that crack they can fan out along another fissure, creating several planes of root mass, which suck up every available bit of nutrients and moisture over a wide area.

Roots growing around rocks are exposed to a much greater possibility of injury than those in soil. The tip of each root is covered with a layer of cells called a root cap, which constantly replace themselves from the inside, much like a layer of skin. The old cells become gelatinous and slough off. This process actually lubricates the area between the root and the rock while at the same time laying down more nutrients for the tree to reuse. 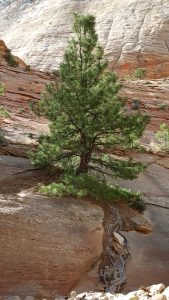 As they grow the roots store also food for the tree. The enlarged roots that you often see wrapped around a rock are grocery warehouses. As my fallen ponderosa pine showed, these giant roots bear no resemblance to the actual tiny root that’s penetrating the rock, doing the work of gathering nutrients.

Most trees have a symbiotic relationship with fungi that live on or inside their roots. On cliffs these fungi etch the rock with enzymes, breaking it down into compounds the tree can use, and channeling the nutrients directly to the tree. There are even types of algae that grow inside the rocks themselves and supply nitrogen.

Trees on cliffs clearly reap real benefits from growing in such hostile environments. Once established, they face far less competition from other plants. The risk of fire and mechanical damage is less. And although we don’t know the exact mechanism that creates dwarf trees, trees on cliffs will often stay small, which lessens the need for nutrients and protects them from becoming week and blowing over. 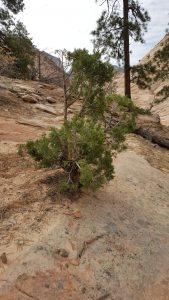 In addition, channeling water from the roots to the top as a whole, the roots of cliff dwelling tree species have specific pathways the nutrients follow. Each route is directly plumbed to one specific part of the trunk then to one specific branch. With the lines of supply so cleanly delineated, when a root is damaged only the areas of the tree connected to that specific root will be affected. This is why you see the gnarly shape to some old trees. That strip of living tissue actually grows around the dead wood, creating intricate beauty.

Even with these adaptations to the lousiest imaginable growing conditions, one might not expect trees on rocks to live long. But paradoxically when trees do grow in these tough cliff environments, they can actually outlive their counterparts in a rich forest environment by a factor of 20 or more.

The oldest trees in the world are trees growing in rocky environments. The Bristlecone Pine in the desert southwest is documented at 4,900 years old. In Ontario, Canada the Eastern White Cedar has been extensively studied. In a normal environment the species typically will live 90 years, reaching a height of about 50 ft. Growing gnarly and small on the cliffs of the Niagara escarpment, they have been dated at more than 1,900 years old. One of these Cedars is 155 years old and only 4 inches tall.

Those spindly junipers in my rock may well live long into this new millennium.